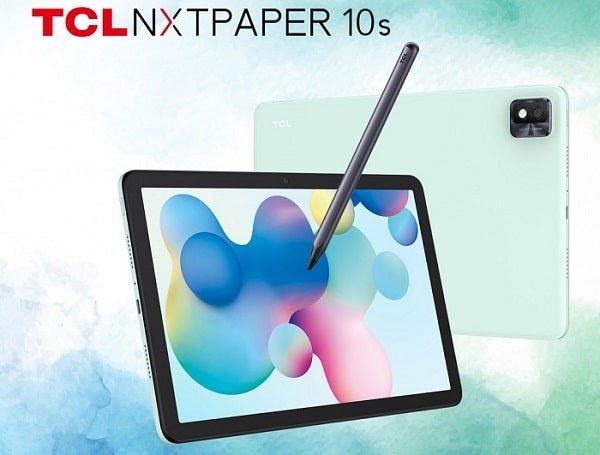 New Android tablets from TCL have been unveiled.

TCL is throwing a massive launch event today, with new phones, TVs, laptops, smart home gadgets, and numerous new Android tablets on the market. Additionally, there are the low-cost Tab 10L and Tab 8 4G and the brand-new Nxtpaper 10S with a matte textured screen. TCL also unveiled three new children’s tablets, the Tree Mini, Mid, and Max, at the event.

A 10.1-inch IPS panel with 1200×1920 resolution is included in TCL’s Nxtpaper 10s. Rather than a glossy surface, this display’s display has a matte finish, resulting in a more comfortable viewing experience with less strain on the eyes. As a result, TCL says that the matte coating on the 10S display significantly decreases blue light emissions compared to standard glossy screen devices. Clear viewing angles and realistic color reproduction are TCL’s claims. The pressure-sensitive display of the 10s is also compatible with the T-Pen active pen.

The Nxtpaper 10s comes equipped with a MediaTek Helio P23 processor, 4GB of RAM, and 64GB of internal storage that can be expanded through a microSD card. The front of the phone has a 5MP selfie camera, while the rear has an 8MP camera with an LED flash. Charges via USB-C at up to 18 watts with an 8,000mAh battery. A specific TCL Kids mode is pre-installed on the tablet, which provides access to an extensive collection of educational and entertaining material. Optional accessories include a writing pad and a type and flip case.

Priced at $249, the TCL Nxtpaper 10s are available in two color options: Ethereal Sky and Dark Grey. Later this month, it will arrive in China and Europe.

The Tab 8 4G has an 8-inch IPS display with a resolution of 800×1280 pixels, making it a more compact version of the Tab 10L. There are 2GB of RAM and 32GB of internal storage, which may be expanded through the microSD card slot that comes with the MT8766B chipset.

The three tablets, all geared at children, are available in 10″, 8″, and 7″ screen sizes. Tkee pens for sketching and writing are included with each one, as well as a hard plastic shell cover for further protection. MediaTek MTK8167B chipsets with 1/2GB RAM and 32GB expandable storage power them.

The Max model has a 4,080 mAh battery, while the Mid and Mini have 2,580 mAh cells, respectively. The two bigger tablets run Android 11 full-fledged, while the Mini tablet runs Android 10 on a microSD card (Go edition).

TCL Tab 10L has a 10.1-inch HD+ display and MT8167B processor, making it a more affordable choice. It’s designed to serve as both a media player and a replacement for bulky textbooks. An internal hard drive with 32GB of capacity may be expanded with a microSD card. All of this is powered by an enormous 4,080mAh battery and Android 11. Also included are a headphone jack and two 2MP cameras on the front and back.

The TCL Tab 10L is available only in Prime Black and costs $99 through TCL. Later this quarter, it will be available in a few chosen markets.