(Full Guide) What is Soundbar and how does it work? 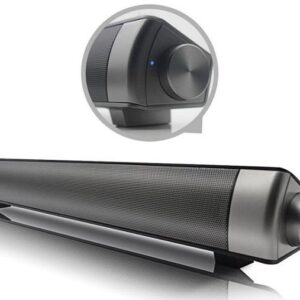 The word (Soundbar) might sound strange to many Nigerians because it’s not yet that popular in Nigeria compared to other developed countries but I am going to tell you everything you need to know about Soundbars and how it works. To give your a simple answer, a soundbar is a portable wired or wireless sound system designed to bring out the best sound quality from other devices especially your Television (TV Set).

In this guide, I am going to tell you everything you need to know about soundbars so stick with me while I take you on the ride, you are going to learn a lot in the end.

You just bought a fantastic television, and after putting it together and turning it on, you discover that, while it looks great, it sounds horrible. Let’s face it, a TV’s built-in speaker system generally sounds mediocre at best, and utterly inaudible at worst. You can add a home theater receiver and a lot of speakers, but connecting them all and scattering them about the room would just add to the clutter. Getting a voice might be the answer.

What exactly is a Sound Bar?

The Sound Bar is designed to work with LCD, plasma, and OLED televisions. A soundbar can be put right below the TV on a shelf or table, and several speakers can be mounted on the wall (wall mounting hardware is sometimes provided).

Self-powered and passive soundbars are the two types of soundbars available. Although the two produce comparable listening effects, their integration into the audio component of a home theater or home entertainment environment differs.

A soundbar that is self-powered or self-amplified

The self-powered soundbar is intended for use as a standalone audio system. This makes them extremely handy since all you have to do is connect the TV’s audio output to the Sound Bar, and the Sound Bar will enhance and replicate the sound without the need for an additional amplifier or home theater receiver.

A DVD/Blu-ray disc player or a cable/satellite TV box can be linked to most self-powered soundbars. Some self-powered soundbars include wireless Bluetooth capabilities, allowing them to access audio material from compatible mobile devices, while others can connect to a home network and play music from local or Internet sources.

A soundbar that is not powered (passive)

A passive soundbar does not have its own amplifier. To create sound, it must be linked to an amplifier or a home theater receiver. Passive soundbars are commonly referred to as 2-in-1 or 3-in-1 speaker systems, in which the left, center and right speakers are simply packed in a cabinet with speaker terminals, with the speaker terminals serving as the only connection.

This alternative, while not as “independent” as the self-powered Sound Bar, is nevertheless needed by some individuals since it combines three primary speakers into a cabinet that may be put above or below a flat-screen TV. Reduce the number of people in the “speaker confusion” category. Although the quality of these systems varies, the concept is appealing in terms of design and space efficiency.

A digital audio projector, which is a product category marketed by Yamaha, is another device that is comparable to a soundbar (designated by the model prefix “YSP”).

Digital sound projectors employ a system of tiny speakers (called beam drivers) that may be allocated to certain channels and projected to various positions across the room, all of which come from a single cabinet.

Each speaker (beam driver) has its own dedicated amplifier, as well as a surround sound audio decoder and processor to support it. Built-in AM/FM radio, iPod connection, Internet streaming, and numerous audio and video component inputs are all available on some digital audio projectors. Video improvements may even be included in high-end equipment. A home theater receiver, amplifier, and speaker are all integrated within the digital audio projector.

Options for the TV’s audio system

In addition to being able to position the soundbar or digital player above or below the TV, it may also be placed on a shelf or hung on the wall. Another option is the soundbar idea, which encompasses everything that is often associated with soundbars.

Place the pieces in the “neath the TV” unit after that. These are known by a variety of names (depending on the manufacturer), such as “sound base,” “audio console,” “sound platform,” “base,” “soundboard,” and “TV speaker base.” This useful alternative is that these “under the TV” systems function as both an audio system for the television and a platform or stand to place the television on top of.

I noted before in this post that certain soundtracks use vertical emission speakers. The recently introduced optional soundbar is meant to fully use the overhead surround sound effects offered by Dolby Atmos and/or DTS:X immersive surround sound formats.

The Sound Bar (and digital sound projector) with this feature may not only push sound forth and sides, but also play it upward, giving the listener a more full front sound field and sound perception from above.

The outcome is determined by how the function is implemented and the size of the room. The predicted height/overhead sound may not be effective if your space is too vast or your ceiling is too high.

The self-amplified soundbar (or digital player, or TV sound system) is a standalone audio system that is not meant to be linked to a home theater receiver, however passive speakers do require it to be connected to an amplifier or receiver.

When shopping for a soundbar, consider whether you want to use it to improve TV watching without having to use a separate home theater receiver setup with a lot of speakers and if you don’t want to limit the number of speakers. To the existing receiver settings in your home theater. Use a self-amplifying soundbar or a digital audio projector if you want the former. Passive soundbars, such as those branded LCR or 3-in-1 speaker systems, can be used if the latter is required.

A subwoofer may still be required

One of the drawbacks of soundbars and digital audio projectors is that, while they can deliver strong mid-range and high-frequency responses, they often fall short on bass. To put it another way, you might need to install a subwoofer to get the bass you want out of DVD and Blu-ray Disc audio tracks. A Sound Bar may come with a wired or wireless subwoofer in some circumstances. Because there is no cable connection between the wireless subwoofer and the Sound Bar, it is easy to position.

There is an intermediate category that exists to bridge the gap between the surround sound limitations of soundbars and the multi-speaker home theater systems. It has no official name, although it may be labeled “hybrid soundbar/home theater system” for all practical reasons.

This option contains a soundbar unit that processes the front left, center, and right channels, a separate subwoofer (typically wireless), and two small surround sound speakers, one for the left surround channel and the other for the right surround channel.

A soundbar or digital sound projector is not a replacement for a true 5.1/7.1 multi-channel home theater system in a big room, but it is an excellent alternative for a simple, tidy audio and speaker system that may enhance your entertainment experience. Easy-to-set-up television viewing pleasure Soundbars and digital sound projectors may also be utilized as great speaker solutions in bedrooms, workplaces, and additional family areas to accompany TVs.

If you’re thinking about getting a Sound Bar, the first essential thing to do is listen to a few songs to see what looks and sounds nice, as well as what matches your setup. Consider utilizing an unpowered soundbar if you already have a TV and home theater receiver. If you simply have a TV, though, a self-powered soundbar or digital player is a good option. 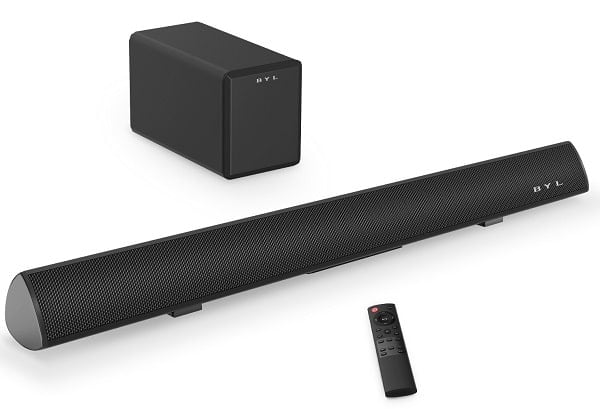