used cars in Nigeria, are you aware of something called “Vehicle history”?

When trying to get a used car, one of the things almost everyone does is to try to determine if the vehicle they’re interested in buying, is worth buying; and to determine this, we typically find mechanics or car experts who can help us inspect the vehicle we’re about to buy. However, while we have car experts in Nigeria who can help carry out very helpful car inspections, the kinds of inspection generally carried out by these experts are far from excellent. In other words, you’ll see a car expert who’ll claim it’s okay to buy a car, but after buying the car, you start to notice all sorts of problem. Not that these experts aren’t that good, it’s just that some problems are very difficult to detect.

So to help people in further reducing the chances of buying a car which seems to be good, but isn’t good, I’ll be introducing you to something called “vehicle history”.

Simply put, a vehicle history is the record of major events of a car. These records are stored in public databases managed by governments. For instance, if a car was involved in an accident, this event alongside some details, will be recorded in a public database. Then if at some point a potential buyer wishes to know some important things about the car, the buyer can simply go this public database and fetch the record of that car from the database, and then they’ll see that the car has been involved in an accident.

So, by being able to know about important things that have happened to a car, it’s possible to avoid certain types of cars which may have difficult-to-detect problems; in other words, vehicle history can be very helpful in the further screening of used cars.

However, while I further intend providing information about how to check the vehicle history of a car, I’ll first provide some details about what types of thing a vehicle’s history can help you learn about a car.

One of the types of information a vehicle’s history can provide you, is information about what kind of usage a car has undergone. There are cars bought for personal use, there are those bought for the sake of leasing them out, there are some bought to be used as taxis, and we also have some bought to be used as police vehicles. And based on information gathered from buyers of used cars, cars which have been used as taxis and police cars typically have serious hidden issue. These types of car may look good from the outside, but they are well-known for serious issues.

So, if you fetch the history of a vehicle and you see that it has been used as a taxi or a police car, it’s best to avoid such a car, if you have alternatives. However, don’t get me wrong, I’m not saying all cars used as taxis and police cars are bad, it’s just that it’s better to avoid them in general, to avoid buying the ones that have hidden problems.

Also, since the airbag deployment history of a car is able to help you learn if the car’s airbag has been deployed before, this can help you ensure that the airbag of the car has been replaced, before you buy the car.

And thanks to the fact that the mileages of cars are from-time-to-time updated in their vehicle histories, it’s possible to detect mileage rollback, since the mileage on the car may be less than what’s recorded in the car’s history.

There are some cars which frequently have issues for reasons mechanics can’t just seem to understand. But by merely looking at a car, you may be unable to tell if the car is something like that. In other words, it’s not impossible that such a car will pass your vehicle inspection, then you’ll end up with a product you’ll always wish you never bought.

But thanks to the existence of vehicle histories, whenever a car undergoes major repairs, these repairs are added to its vehicle history. In other words, with the help of a car’s vehicle history, you may be able to tell if a car is such a car, thereby giving you the chances to avoid such a product.

A lot of times, when a car that has been involved in an accident gets repaired, they never return to the same condition they were, before the accident. In other words, even though they may look good from the outside, they may have a lot of hidden issues which won’t show up until you start using them. So, when you come across a car which has been involved in a major accident, it’s better to avoid them. In fact, a hidden problem with the car is probably what caused the accident in the first place.

Cars which have been damaged by flood, at least once, are known to develop all sorts of issue later in the future. They may look and be actually okay during inspection, but after some months or a few years after purchase, they start to develop all sorts of problem. In fact, we, as well as many other top automobile experts around the world, strongly discourage against buying cars which have once been damaged flood.

But how will you know if a car has been involved in flood damage? Well, one the ways you can know is with the help of the vehicle history of the car.

There are many cars which have not been involved in an accident, a flood, or any disaster, but have continued to develop issues every now-and-then. This kind of car is typically what you’ll see has had may owners. For instance, you may see a car which has had about 6 owners in just less than 2 years after its first purchase. So, when you see a car which has had too many owners than it should ordinarily have within its age, chances are that the car has some serious problem. In other words, it’s best to avoid this kind of car. And thankfully, one of the things the history of a car can tell you, is how many people have used it, since it’s first purchase.

There are some cars which have been involved in disasters that wrecked them massively. And for one reason or the other, some of them got rebuilt, using some of its components which are still working, and some new components. In fact, many rebuilt cars will look like new cars.

However, while rebuilt cars may look great from the outside, a good number of them do have issues which only become evident after buying them; they’ll pass all sorts of vehicle inspection, but it’s when you start driving them as the new owner that you start to see the problems it has. However, not all rebuilt cars are like this, so you can consider a rebuilt car. But, my point is, “While rebuilt cars kind of worth the risk, if you have a better alternative, you should consider that alternative.”.

There are some cars that were bought as new cars, but they turned out to have too many serious manufacturer problems. These cars are typically very frustrating and sometimes even dangerous. When trying to buy a used car, this type of car is something the seller may try to sell you. But thankfully, one of the things you can know with the help of a vehicle’s history, is this kind of information. In other words, the vehicle history of a car can help you avoid buying a car of this type. However, vehicle history isn’t the only way to spot cars of this type, a good inspector should also be able to spot a car of this type.

In 2016, Fiat Chrysler Automobiles (the maker of the Jeep Grand Cherokee (WK2)) was faced with a serious lawsuit, after a build of the car owned by Anton Viktorovich Yelchin killed him, due to a defect in the car.

Following the death of the Russian-American actor, Fiat Chrysler Automobiles, recalled all builds of the car, for fixing, to prevent the car from further killing other people. And while you may be hearing this story for the first time, this won’t be the first time cars will be recalled for some serious defect. In other words, chances are that the car you’re trying to buy has been recalled for fixing.

How to get a vehicle’s history

Step 1: Find the Vehicle Identification Number (VIN) of the car

To get the vehicle history of any car, the first thing you have to do, is to find the Vehicle Identification Number of the car. VINs are typically 17-alphanumeric-characters in length. Every car you see around has a VIN, and never will you see two cars released within a 30-year interval having the same VIN; in other words, VINs are quite unique.

Step 2: Use the service of an online vehicle history retriever

After getting the VIN of the car you intend buying, the next thing to do, is to find an online vehicle history retriever. We have many of them online, but CarFax is the one I use. CarFax will ask you for the VIN of the car you’re interested in, and you’ll also be asked to pay a service fee. As of the time of writing this content, CarFax charges “N4,200 per report”.

While under normal circumstances, the vehicle history of a car should contain all major events that have ever happened in the vehicle’s history, there are times when some records will be missing. So don’t treat a vehicle’s history as completely comprehensive.

Another important thing I’ll like to state is that, even though a vehicle history can be used to weed out bad cars from good ones, you shouldn’t see it as a replacement for a vehicle inspection. Rather, vehicle history should only complement inspection, not replace it. 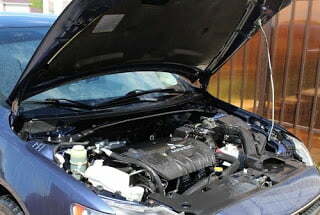 5 Truths Nigerian Car Dealers will not tell you